I live in chronic pain. The reason for my pain, is Endometriosis. I was diagnosed through surgery when I was 17. I have decided to have this blog, so that those in my life can get a peek into my day to day issues that affect my life in every way. 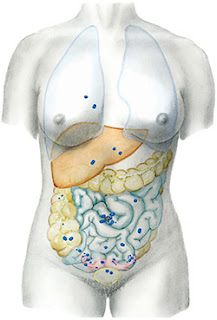 I live everyday with an invisible illness, a disease called Endometriosis.

The cause for this disease is still unknown.


treatment of infertility if pregnancy is desired.

“Endometriosis is a painful, chronic disease that affects 5 1/2 million women and girls in the USA and Canada, and millions more worldwide. It occurs when tissue like that which lines the uterus (tissue called the endometrium) is found outside the uterus -- usually in the abdomen on the ovaries, fallopian tubes, and ligaments that support the uterus; the area between the vagina and rectum; the outer surface of the uterus; and the lining of the pelvic cavity. Other sites for these endometrial growths may include the bladder, bowel, vagina, cervix, vulva, and in abdominal surgical scars. Less commonly they are found in the lung, arm, thigh, and other locations.

This misplaced tissue develops into growths or lesions which respond to the menstrual cycle in the same way that the tissue of the uterine lining does: each month the tissue builds up, breaks down, and sheds. Menstrual blood flows from the uterus and out of the body through the vagina, but the blood and tissue shed from endometrial growths has no way of leaving the body. This results in internal bleeding, breakdown of the blood and tissue from the lesions, and inflammation -- and can cause pain, infertility, scar tissue formation, adhesions, and bowel problems.”

For years I was only badly affected by Endo about 13days out of 30. Now I am affected to the point it affects me each and every day.

Endometriosis can affect women in many ways more than just pain!

“Some women experience pain or cramping with intercourse, bowel movements and/or urination. Even pelvic examination by a doctor can be painful. The pain intensity can change from month to month, and vary greatly among women. Some women experience progressive worsening of symptoms, while others can have resolution of pain without treatment.”

Examples of other such things it can cause:
Infertility, extreme fatigue, other gastrointestinal upsets such as diarrhea, constipation, nausea. Other things many women suffer from include allergies, chemical sensitive’s and frequent yeast infections, weak immune systems, low back pain/cramps, irregular or heavy bleeding, blood in the urine.

Many women with endometriosis also find themselves with a diagnosis of inter cystitis. I do not know/understand enough to know Endometriosis causes the IC or not. Though I have a feeling Women who have endometriosis on their bladder (that cannot be removed surgically because this could perforate the bladder) are more likely to have either bladder issues or IC.

•Deeper implants and implants in areas with many pain-sensing nerves may be more likely to produce pain.
•The implants may also produce substances that circulate in the bloodstream and cause pain.
•Lastly, pain can result when endometriosis implants form scars. There is no relationship between severity of pain and how widespread the endometriosis is (the "stage" of endometriosis).


I am not going to go into endometriosis “treatments” since I am not in the mood to try to explain that, nor are they at all effective for everyone, in cases (like me) each medication treatment made things worse for me, surgery helped but only once and now causes no effect.
Posted by shell87 at 2:21 PM